How Does a Water Softener Work? 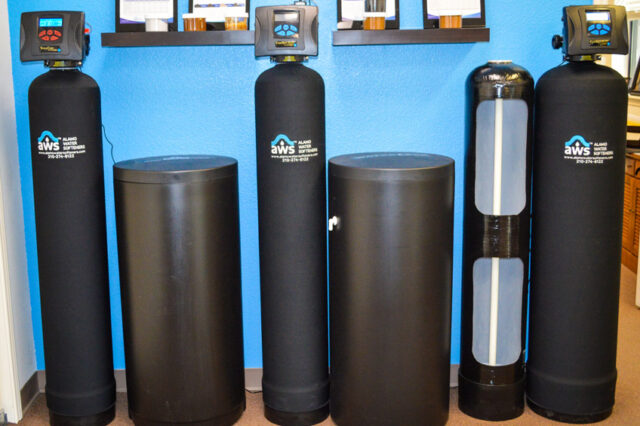 In most cases, we know how most of the appliances in our house operate. We know that if we pop a bag of popcorn in the microwave that we have to keep an eye on it or our house will smell like burnt popcorn for days! We know how you turn on the stove and wash our clothes in our washing machine. One of the appliances that most people have no idea about is their water softener, which begs the question: How does a water softener work? Now the science behind softening water may be complicated and intricate, but the basic process is easy to understand! The first step in understanding how a water softener works is to understand all the different components used within. Each softener is made up of a couple of basic components. First is the media tank. This is the tall and skinnier tank with the tubes, pipes and valves. At the top of each media tank is an electronic controller. This is main hub of your system. Inside the media tank is an ion-exchange media consisting of either resin beads or zeolite which removes the minerals that make up hard water. Next is the brine tank. This is the shorter tank that you put salt into every time it gets low. The ride created in the brine tank is used to clean the resin inside of the media tank once it has absorbed its capacity of hardness minerals. Then the “brine line” is the tube that connects the two tanks which feeds water between the two during regeneration (we will also tell you what happens during regeneration). Now that you know the various components that go into a water softener, you can know exactly how a water softener works. First, your raw, hard water (either from your municipal source or well) is fed into the tank through the valve at the top, runs through the softening media where the minerals are removed, then the softened water flows out back into your home. This water is free of damaging components in hard water. Now the process behind the how the resin removes the hardness is called ion-exchange. Now if you remember 4th grade science, just imagine a magnet attracting small metal shards in science class. Your softener is doing the same thing since opposite polarities attract each other. The media attracts the damaging hardness sodium ions in your hard water and the good ones go our into your home. Boom! You have soft water! Now when your media becomes too full of hardness, your system goes into regeneration. This process is typically set for the middle of the night when you’re not using any water. This is a basic four step process. First the media tank will add softened water to the brine tank forming a nice saltwater solution, then raw hard water enters the top of the brine tank runs down the middle and then is forced back up from the bottom. This agitates and stirs the media, flushing out any debris to the drain. The saltwater from the brine tank is then drawn into the media tank past the (remember from science) negatively charged resin beads and causes a positive sodium ion to take back their place on the resin beads or zeolite crystal while the previously attached hardness minerals are flushed down the drain. Then the media tank is given one final rinse to push out any excess salt that may be in the tank. After the final rinse, the unit is ready to soften water again, the media us fully charged with sodium ions and ready to repeat the softening process. We hope this helped you understand exactly how a water softener works. As always if you have any questions, one of our professionals will be happy to take your call and walk you through anything that you don’t understand. Contact Alamo Water Softeners in San Antonio today at (210) 274-6122.