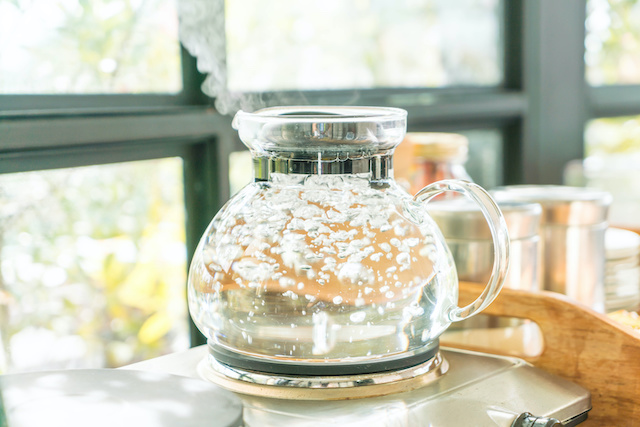 Not that we don't have enough to worry about right now, but there has been a lot of talk about the safety of the water system during a crisis, like the one we are in now. More and more questions are raised when people are flocking to their nearest H-E-B or Wal-Mart and snagging up cases of water. If you see someone walking out of the store with 5 cases of water, you think to yourself, "should I be buying bulk water for my family too?" As of today, our area does not have to worry about this, even though some folks are. SAWS has released statement after statement that the San Antonio area water system is strong, healthy and prepared for instances such as the current COVID-19 health crisis. Normally, boil water advisories follow natural disasters, or municipal failures. Both of which are not on the horizon, but, preparation is key. The history of human beings boiling water for consumption dates to a Sanskrit writing from around 2000 B.C. that described some methods for doing so over fire or by using the sun. Boiling water before drinking it made it taste better, look clearer, and seem safer than using dirty ditchwater. Of course, the ancient folk had no concept of microorganisms, pathogens, or bacteria. It would take a few thousand years to understand that near-invisible water borne bugs were the culprit behind getting sick from sipping water that flows downhill from the village latrine. Times have changed for the better.

Today in the United States, the extent of our drinking water concerns largely revolves around opening the sink tap, filling a glass, and forgetting about it. While there are some concerns in some parts of the country, Flint, Michigan comes to mind and even most recently in Houston, most of us can feel safe enough behind the defense of our local water treatment facility and its regulations and monitoring capabilities. But, even the most failsafe municipal systems can occasionally crack under the weight of natural disasters, infrastructure breaks, or other unforeseen circumstances. In those cases, a boil water advisory may be issued to notify you that their water may not be safe to consume.

What Is A Boil Water Advisory?

A boil water advisory is the water system equivalent to a power outage. It signals a problem within the water supply, usually after some component in the system has failed and is issued to protect homeowners from ingesting or using water that could be contaminated. Most advisories are issued as precautionary measures, meaning that contamination hasn’t been confirmed, but a scenario has taken place that could have introduced contaminants into the public water system. Alternatively, a mandatory advisory is issued when it has been determined that contaminates have been introduced. Some of the scenarios that can trigger a boil water advisory are: Natural Disasters: One of the most common triggers for a boil water advisory, a natural disaster such as a hurricane, earthquake, or extreme flooding can introduce run-off into the public water system in several ways. Water Main Break: A water main break or pressure loss in the water system can result in contaminated water being introduced, allowing bacteria and microorganisms to enter the supply. Service/Maintenance: Advisories will often be issued during or after routine service on water supply lines as a precautionary measure. Under current circumstances like we are facing with COVID-19, a boil water advisory is not something that you need to worry about. If you draw your water from a well, then it may be advisable to boil your water if you don't have any current water treatment solutions for your home.

During A Boil Water Advisory

Much like the name implies, tap water must be disinfected or purified while a boil water advisory is active. The Environmental Protection Agency (EPA) advises that any water that will be used for drinking, ice making, food preparation, and teeth brushing should be heated to a rolling boil for at least one minute and allowed to cool prior to use. The act of boiling will kill any pathogens, bacteria, and microorganisms in the water and make it safe for use. For bathing, showering, and cleaning, especially with children or individuals with disabilities, it is important to make sure that cleaning time is supervised so water doesn’t enter the eyes, mouth, or nose. Ingesting water during a mandatory boil advisory can open the door to a range of illnesses and unpleasant waterborne ailments. A boil advisory might be a good time to break out the bottled water. Sticking to the general rule of thumb of keeping non-purified water out of your eyes, mouth, or nose during an advisory and using boiled or bottled water for cooking, drinking, and teeth brushing is the best way to make sure that you and your family stay safe and healthy.

Depending on the severity of the incident that triggered it, a boil advisory usually lasts between 24 to 48 hours. Once an advisory is lifted: Flush Plumbing: Run all your cold-water faucets on full for at least five minutes each. Dump Ice: For automatic ice makers, dump all the existing ice. To flush the lines that feed the ice maker, make and dump three batches of ice before letting the bin refill. Clean the ice bin with a disinfectant. Replace inline water filters: Replace inline filters such as the ones found in your refrigerator. Regenerate Softeners: Manually initiate a full regeneration on your water softener. Call your local WaterCare dealer for more information. While it can sound scary on paper, a boil advisory is nothing to panic about. It’s a precautionary measure to make sure that you and your family stay safe and healthy when there’s a potential problem with the water supply. With a little precaution and preparation, a boil alert is easy to manage and stay ahead of. For a little extra insurance, talk to us about your water. Alamo Water Softeners has a variety of units that connect to your plumbing and use different methods to disrupt and deactivate bacteria as they pass through the unit, giving your home an added layer of defense against incoming bacteria. Call Alamo Water Softeners in San Antonio today at (210) 274-6122. Follow Us!